One of the perks of being members of D23 – The Official Disney Fan Club, is the special events we get to attend.  On December 4th, Disney created such an occasion.  Usually reserved for Animation Studio cast members, the “Light Up The Season” lighting of the campus has been expanded to include members of D23.  We were privileged to attend this Christmas Lighting event along with hundreds of other Disney fans.

The Burbank studio was set up with lights, decorations, photo back drops, character photos, games, “goodie stations” with hot chocolate, hot apple cider, cookies, popcorn, a train ride to the north pole and much more.  Additionally, the Marine Corps Reserve was there collecting Toys for Tots and a station was set up for making gift bags for kids in hospitals.

Most of the campus was open for exploring, including the Hall of Legends capped by the iconic Team Disney building which has the Seven Dwarves who hold up the façade. 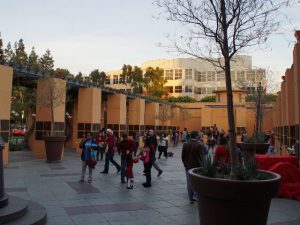 Hall of Legends. Bronze plaques with handprints of Disney Legends

When the moment came, the very large tree at the end of Mickey Avenue was lit.  The head of D23, Michael Vargo, along with Sgt. Bagley of the United States Marine Corp and “Santa” Goofy flipped the magic switch. 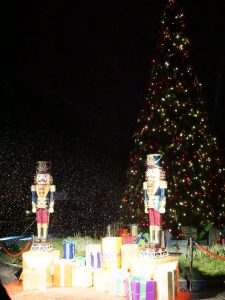 And no Disney Christmas would be complete without some “snow,” barely visible in the light near the nutcracker on the left.

A fun time to celebrate the season, meet up with friends and acquaintances, and opportunities to make new ones.  It’s times like this that make us miss living in Southern California – and we definitely miss the California versions of Disney and the opportunities.

This site uses Akismet to reduce spam. Learn how your comment data is processed.

PIXAR Word Puzzle Posted on June 15, 2020 by Melvin & Debbie — Leave a reply PIXAR Movies. (©Disney/Pixar) It’s been a busy month with the new addition to our family, so we have fallen behind on ...
View on Facebook
· Share

May The Fourth Be With You! We have added two more word puzzles for your challenge and enjoyment!mickeyafterfifty.com/wp/star-wars-word-puzzles/ ... See MoreSee Less