(As with all our movie reviews, we will attempt to entice you without having to issue any “spoiler alerts.”) 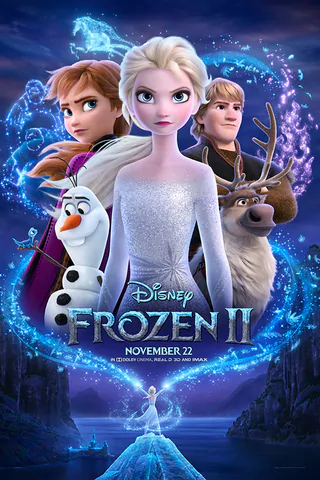 Three years since Anna saved Arendelle with her dying act of true love, we are transported once again to that mythical (mystical?) kingdom ruled by a young queen and her little sister.  In the gap of time, Elsa has learned to control her fear and is no longer a threat to the village, but now she is called upon to use her powers to find the truth to right a wrong between two people groups.

After an unexplained event dried up the water, put out the fires, blew everyone around and eventually ran them out of town, Pabbie Troll shows up to provide some clues about what is to come. Elsa, hearing a call in the wind, follows it and inadvertently awakens the spirits of Earth, Wind, Fire END_OF_DOCUMENT_TOKEN_TO_BE_REPLACED

After a 14 year hiatus, The Incredibles has hit the big screen with their sequel to the 2004 box office success, amassing and even larger opening weekend than Finding Dory, which was a box office record.

It’s amazing that after 14 years, Jack-Jack hasn’t aged a day!

Before we proceed with this review, we think it disappointing that we must issue a couple of warnings regarding a Disney animated movie.  First and most important, there are several scenes with flashing lights that could trigger an epileptic episode to those with this medical condition, or any medical condition that can be made worse with flashing lights.  Second, while many kids today have heard a lot of inappropriate language, this PG rated movie has a couple of scenes with stronger language than we believe is necessary for the plot.

The Incredibles is now back in theaters with their sequel. (©Disney/Pixar)

The Incredibles 2 picks up where it left off with the Underminer attacking the city and the supers attempting to catch him.  The pursuit leaves the city in shambles and causes a huge political uproar against them, so much so that the entire department is being shut down and their trusty government friend, Rick Dicker is being retired.  But a wealthy businessman and his sister want to hire them to END_OF_DOCUMENT_TOKEN_TO_BE_REPLACED

“Why do we have to grow up? I know more adults who have the children’s approach to life. They’re people who don’t give a hang what the Joneses do. You see them at Disneyland every time you go there. They are not afraid to be delighted with simple pleasures, and they have a degree of contentment with what life has brought – sometimes it isn’t much, either.” – Walt Disney

Over the weekend, the official Disney Fan Club – D23, held a “Magical Screening” of Peter Pan celebrating its 65th Anniversary.  Screenings were held at the Animation Studios in Burbank and the AMC Theater in Disney Springs in Orlando, 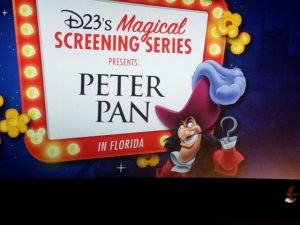 where we are currently visiting.  Events like these are a lot of fun and what keep us renewing our membership!

There is a lot of history about this movie that few know.  Peter Pan took many years to get to theaters; even though Walt obtained the animation rights to the story in 1939, it didn’t make it to the big screen until 1953 due to many circumstances involving finances and America entering into World War II.

The event was hosted by Steven Vagnini, the only D23 Cast Member in Florida, who has now been promoted to Walt Disney Imagineering and will END_OF_DOCUMENT_TOKEN_TO_BE_REPLACED

“From this moment, everything will change”

The latest release from the imaginations of Disney/Pixar is now in theaters with Cars 3.  The story line of this latest animated movie in the trilogy is of the quality that should have been in Cars 2, harkening back to the original plots of racing and relationships instead of a sophisticated “James Bond” type of spy novel.

Cars 3, starring all of our favorite Radiator Springs characters is now in theaters. (©Disney/Pixar)

We find our favorite race car still winning race after race, with the occasional loss.  But then the inevitable happens:  Along comes a younger, faster car (Jackson Storm) who turns the racing world upside down.  Lightning McQueen, in an attempt to get back on top, pushes his limit to its unfortunate consequences and we next find him back in Radiator Springs, along with all the END_OF_DOCUMENT_TOKEN_TO_BE_REPLACED

Yeah, yeah, we know.  The movie has been out for almost three weeks – so what took us so long?  We just didn’t have the opportunity with our travels to find enough time for a night at the movies.  The important thing is we finally did it!  We saw the new Disney Beauty and the Beast live action movie in 3D. 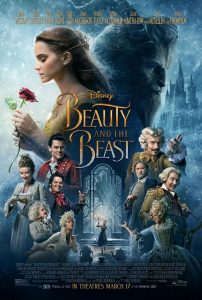 Beauty and the Beast now in theaters. (©Disney)

With just a few exceptions, this story strays very little from the original 1991 animated movie; from the bookworm Belle, to the antagonist Gaston who is bent on marrying her, to the iconic songs and French setting.  The director and writers have taken the liberty of expanding on parts of the story that were left to the imagination in the original, such as the fate of Belle’s mother (most Disney movies are notoriously missing at least one parent).  The Enchantress who cast the beastly spell on the prince plays a much larger, and surprising role in this story.

The story also goes farther in humanizing the beast when he begins quoting Shakespeare, and then grumbles when Belle tells him that Romeo and Juliet is her favorite, which helps the audience realize that under that scary, hairy façade is a person who is capable of feeling.  The beast is also given END_OF_DOCUMENT_TOKEN_TO_BE_REPLACED

As D23 members, we spent an afternoon at the Disney Animation Studios in Burbank celebrating 80 years of animation with a viewing of Disney’s 50th animated full length feature, “Tangled.” 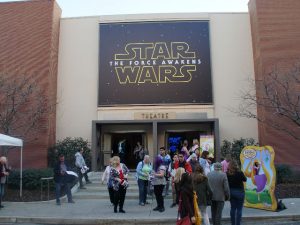 Seated in the private theater on the Animation campus, the day began with a presentation by Disney Archivist, Dave Smith.  He recapped the 56 animated feature films by breaking them down into eras of Disney history.

He described these eras as:

1937-1942:  The Golden Age.  This was the dawn of animated movies and set Walt on solid footing for his studio.

Disney Animation Studio’s latest movie, Moana, is an original story about the daughter (and probably soon to be an official Disney princess) of a village chief who is attempting to save her people from disaster.  This story takes place on an island in the Pacific in a past era and incorporates a lot of Polynesian mythology.

Chief Nui, Moana’s father is grooming her to become the leader of the village, but her heart is inexplicably drawn to the ocean.  Only when her grandmother reveals to her the village’s history of being voyagers and the story of how the demigod Maui stole the “heart” of Island Goddess Te Fiti, does she realize that she must journey across the ocean in order to save her people.

From the mystical mind of Roald Dahl and magic of Steven Spielberg comes Disney’s latest movie, The BFG (Big Friendly Giant).  We had an opportunity to preview this movie, courtesy of Disney’s Official Fan Club, D23.

The BFG is a somewhat dark film with intense and scary scenes involving a little girl in a world of giants, most of whom want to eat her and are willing to do anything to satiate their appetite for “human beans.”

There are also funny and light-hearted scenes, strange words, and unusual happenings such as water running uphill or bubbles sinking in a glass.  These are similar to what we see in other classics from Roald Dahl such as END_OF_DOCUMENT_TOKEN_TO_BE_REPLACED

Can you imagine a movie that is bigger than Frozen or Zootopia?  It doesn’t seem possible, but the opening weekend of Finding Dory, the latest animated movie from Disney-Pixar, grossed more than $136 million!  More than double what Frozen brought in during its opening 3-days; and swimming past Zootopia’s $75 million for the same time period.

Dory returns with her own movie about finding her family, if she doesn’t forget where she is going. (©Disney-Pixar)

It’s no wonder.  Our favorite memory-challenged royal blue tang fish is back after a 13 year hiatus, bringing us laughs as she makes every attempt to locate her family.

After Mr. Ray’s school kids trigger memories about her past, Dory employs her close friends Marlin and Nemo to help her find her parents somewhere off the coast of California.

In this follow-on to Finding Nemo, we are introduced to baby Dory as her memories of her parents pop in and out.  Along the trip to California, we get to see some old faces such as Crush and Squirt, meet one of her childhood friends, Destiny, and greet a new friend, Hank, a cranky octopus (septopus?) who just wants to get to the Cleveland Aquarium and be left alone.

During this adventure, Marlin and Nemo find themselves separated from Dory and in an impossible situation.  But Marlin’s reflection on “what would Dory do” made him realize how she helped him be END_OF_DOCUMENT_TOKEN_TO_BE_REPLACED

We took the opportunity to take our three year old grandson to see Disney’s newest PIXAR animated movie, Zootopia, on opening weekend.  Our first choice for theaters was sold out for at least two showings; so we then purchased advance tickets online to make sure we could see the movie at our convenience. 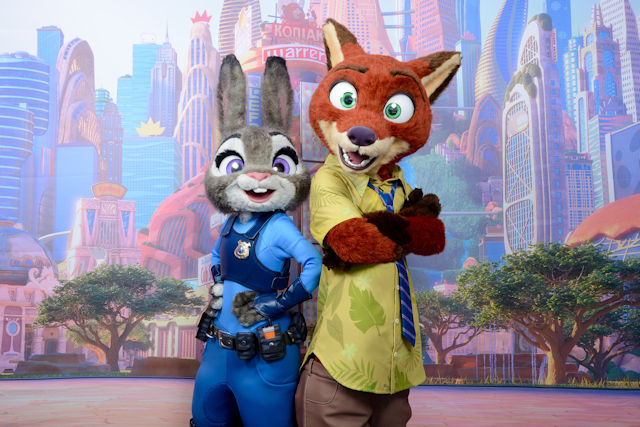 Beginning this spring, Nick Wilde and Judy Hopps from Walt Disney Animation Studios’ “Zootopia” will be visiting Disneyland Resort, where guests can find them on Hollywood Boulevard at Disney California Adventure park and at Magic Kingdom Park at Walt Disney World Resort during the “Move It! Shake It! Dance & Play It!” Street Party at Magic Kingdom Park. “Zootopia” opens in theaters in 3D on March 4. (©Disney)

PIXAR Word Puzzle Posted on June 15, 2020 by Melvin & Debbie — Leave a reply PIXAR Movies. (©Disney/Pixar) It’s been a busy month with the new addition to our family, so we have fallen behind on our puzzles. This month we have a single puzzle that should be suitable for all levels of difficulty...
View on Facebook
·Share

May The Fourth Be With You! We have added two more word puzzles for your challenge and enjoyment!