“The Ultimate Disney Fan Experience.”  That’s how Disney describes their biennial 3-day expo.  This year, I would definitely have to agree with that description.  This was only my (Melvin) second expo, but it was heads and shoulders better than the 2013 experience.  Unfortunately, Debbie was not able to attend, and even my trip was limited to just the first day.  But I could have easily stayed all three days if circumstances allowed. 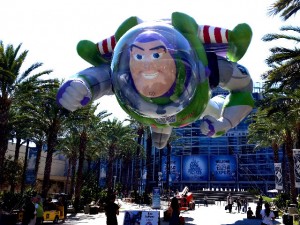 Outside the entrance, guests were greeted with the giant Buzz Lightyear helium balloon from the Macy’s Thanksgiving Day Parade.  Inside, you are treated to three days of everything Disney.  There were pop-up stores with limited edition merchandise (Disney Dream Store and Mickey’s of Glendale), Disney Archives, previews of changes coming to the parks, panels with Disney Legends, Mouseketeers, Artists, Actors, Imagineers, opportunities to meet your favorite Disney star, and just END_OF_DOCUMENT_TOKEN_TO_BE_REPLACED

We took our grandson, Scott, to Disneyland on August 11th.  It wasn’t his first time to any Disney park, but it was our first time to take him by ourselves to Disneyland.  At age 3, he is already a Disney veteran.  He enjoys watching the Mickey Mouse Clubhouse, Jake and the Neverland Pirates, and a few other animated shows on the Disney Channel, so he is already familiar with the characters and isn’t afraid of any of them.

His first park experience was in early 2014 around the age of 1-1/2, then three more times before he turned 3.  But now, he was a lot more aware of where he was and what was going on around him and he knew he could ride some things.

Gawrsh!, we just had to start his day off right with breakfast at Goofy’s Kitchen.  In addition to a lot of good food, it is a fun character dining experience with Goofy, Minnie, Donald, Chip & Dale, and sometimes others such as Alice, the Mad Hatter and Captain Hook.  They all come around to the table for photos and to tease the kids.

Since this is a buffet, we could fill up and get our energy to chase a 3-year old as he explored the park with all its offerings while looking for his favorite characters. END_OF_DOCUMENT_TOKEN_TO_BE_REPLACED

First, we would like to apologize to our reader (whoever you are) for the lack of posts this summer.  It has been a while since our last message, but these couple of months have found us unusually busy and events have taken our time away from visiting anything Disney and writing about our experiences.

Since Melvin is very soon facing mandatory retirement, we have been repairing, cleaning and polishing the house to put it up for sale and we finally turned it over to a realtor on July 14th.  We have had an amazing number of people look at our place; and all have said they really liked it.  We have had a couple of offers, but there were things that made them questionable and so far they haven’t gone through to begin escrow.

In between all this, we have been END_OF_DOCUMENT_TOKEN_TO_BE_REPLACED

PIXAR Word Puzzle Posted on June 15, 2020 by Melvin & Debbie — Leave a reply PIXAR Movies. (©Disney/Pixar) It’s been a busy month with the new addition to our family, so we have fallen behind on our puzzles. This month we have a single puzzle that should be suitable for all levels of difficulty...
View on Facebook
· Share

May The Fourth Be With You! We have added two more word puzzles for your challenge and enjoyment!mickeyafterfifty.com/wp/star-wars-word-puzzles/ ... See MoreSee Less